Sometimes, believe it or not, learning takes place without technology. Outside even, in the open air.

If you’re reading this in the New York area, maybe you can help out? Watch the video and you might get inspired: 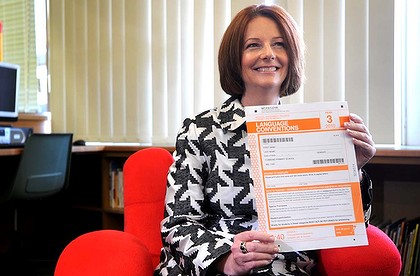 It’s been a big week, chock-full of NAPLAN testing, among other things. Three mornings of more paper-shuffling than you can poke a 2B pencil at.

And is it worth the effort? Mine, my team or the students? I doubt it. I’ve blogged about NAPLAN before: about teaching to the test, the new lows of league tables, and the fact that other places like England  have begun to reject the national testing agendas we’ve turned into an industry.

And, there’s plenty of arguments against going down the NY schools pathway that Julia Guillard has latched on to with such enthusiasm.  This SMH article described how testing has actually failed NY schools, or this City Journal article, Can NY clean up the testing mess? that describes Campbell’s law:

“The more any quantitative social indicator is used for social decision making, the more subject it will be to corruption pressures and the more apt it will be to distort and corrupt the social processes it is intended to monitor.”

Or, as this National Times article put it:

The big question is why Australia would want to emulate a country like the US where academic performance standards are, on average, much lower and where educational opportunity for many children depends on the luck of a lottery draw.

Even Kevin Donnelly has changed his mind about this stuff, as he writes here in The Drum: and says, among other things:

• Testing has failed to raise standards in England or New York and is now seen as counter-productive. Diane Ravitch’s most recent book, The death and life of the great American school system, details the flaws with NY’s model of standardised testing and high-risk accountability.

According to the US national test (NAEP), NY’s results have flatlined. In the UK, notwithstanding national tests and league tables, standards have also failed to improve and the Rose Report, evaluating primary school curriculum in the UK, argues against an over-emphasis on one-off basic skills tests.

• The curriculum has been narrowed and the focus is on basic skills instead of higher order thinking. Subjects like music, art, physical education and history fall by the wayside as teachers and schools focus on drilling for literacy and numeracy tests.

• Schools and teachers are adopting suspicious ways to get better results – poor students are excluded from tests, weak students are told to stay at home, teachers cheat by helping students in the classroom.

• US and Australian test experts agree that standardised tests like NAPLAN are unreliable, invalid and cannot be trusted (it’s lies, damn lies and statistics).

I’ll leave the last word to some of the kids who sat the test this week. Yes, I know that re-tweeting is easy, but so is pretending you’re actually doing something about learning by giving every student who happens to be the same age in Australia exactly the same test.

Okay, that blog post heading might have been a bit of an excuse for me to show off this gorgeous winter sunset photo, which I took from Mt Martha, looking over Port Phillip Bay.  And the sun has set on Term 3 too, which is a good thing. A very busy last few weeks with the Expanding Horizons Conference, the Chisholm ‘Ripple’ presentation, which seemed to go well, as well as the normal ‘stuff’ that fills up a teaching term. Looking forward to the holidays, and excited about heading to NY for the first time. Which no doubt will make an appearance here sometime later on.

I had made a solemn promise to my blogging self not to talk any more about the propects of national curriculum since we all apparently agree on what a great boon it will be for our nation, and those students who move interstate every year, for all Australian curriculum, including content and pedagogy, to come out of Canberra where only good things happen!

However, I couldn’t resist another go at breathing life into the corpse of local and state autonomy by pointing out that Britain is about to abandon those very reforms we’re about to copy. The Guardian reports today:

In a totemic break from the Blair years, next week’s education white paper will signal the end of Labour’s national strategies for schools, which includes oversight of the literacy and numeracy hours in primaries. The changes will strip away centralised prescription of teaching methods and dramatically cut the use of private consultants currently employed to improve schools.
They will give schools more freedom and establish new networks of school-to-school support to help drive up standards in what will be described as a “new era of localism”.

In a totemic break from the Blair years, next week’s education white paper will signal the end of Labour’s national strategies for schools, which includes oversight of the literacy and numeracy hours in primaries. The changes will strip away centralised prescription of teaching methods and dramatically cut the use of private consultants currently employed to improve schools.

They will give schools more freedom and establish new networks of school-to-school support to help drive up standards in what will be described as a “new era of localism”.

It’s not all good news, of course. Britain also proposes New York style report cards for schools giving schools a grade from A to F.  Funny how only schools get a report card and a grade; isn’t is possible to think outside this paradigm when we’re talking about education?

So, I was pleased to read in the NY TImes today that some US high schools are returning to electives as a tool to keep senior students interested in school.

The comment that caught my eye though, in light of our Federal Government’s recent interest in NY style schooling and national curriculum imperatives was this:

After years in which tight school budgets and a battery of federal and state testing mandates have narrowed curriculums nationwide to emphasize basic reading, math and science, Pelham and a handful of other high-performing school districts have begun to expand their course catalogs with electives.